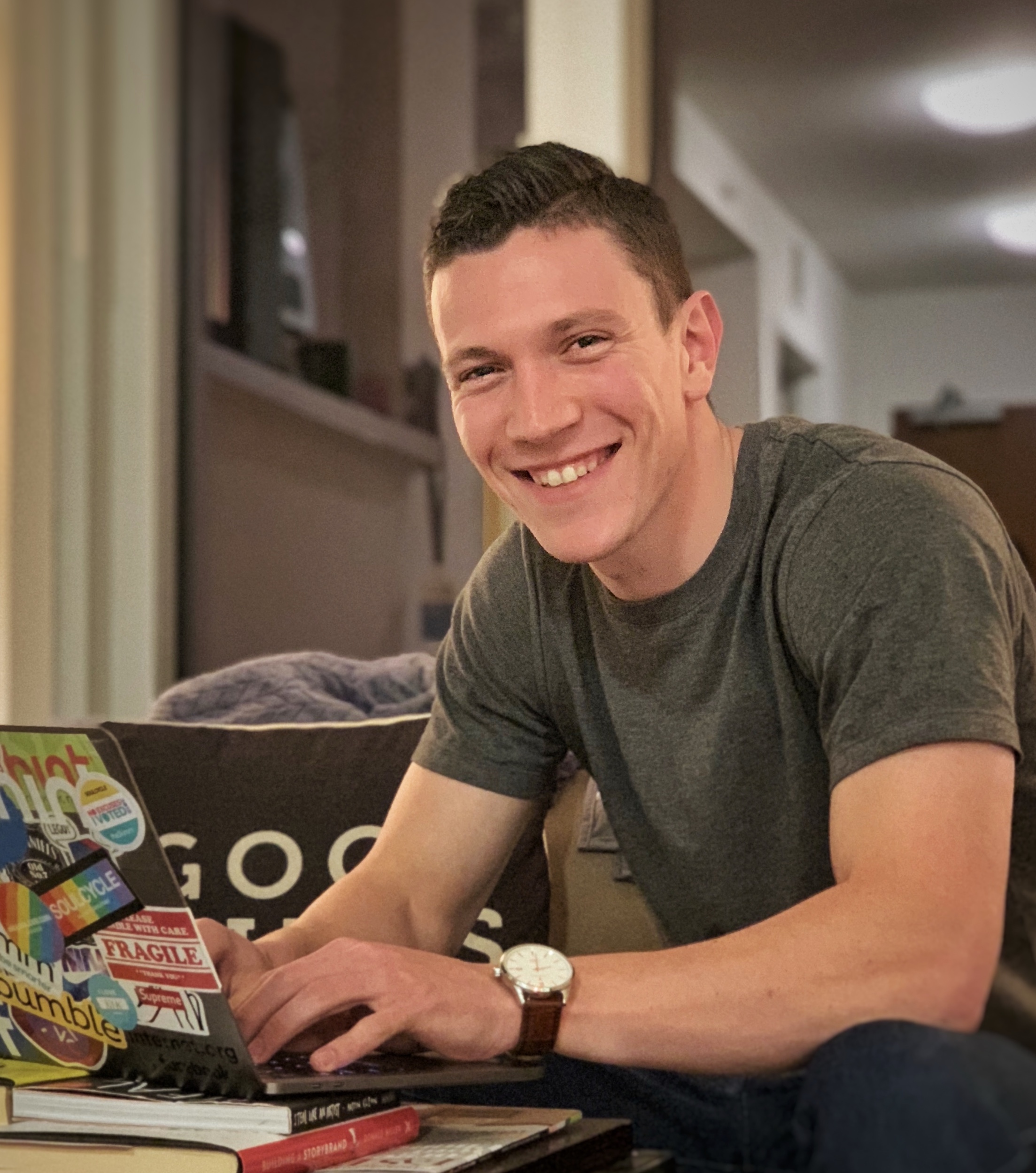 “Having a coach I can lean on when things get difficult, who can tell me exactly what to do so I can just execute and surrender to their framework and philosophy, is something I'm a big fan of. He can think long term in a way a creator can't. Billy is a flashlight.”

David Perell is passionate about harnessing the power of the internet to share ideas. Having overcome his own personal struggles with writing, he quickly grew an online audience and became a sought-after consultant. His podcast has featured business and thought leaders such as Seth Godin, Erika Nardini, Jason Fried, and Neil deGrasse Tyson. Turning his attention to teaching, he created Write of Passage in 2019 to help others share their knowledge. The course has now attracted more than 500 students from over 40 countries.
‍

“Launches end up becoming the core competency of your business. How do you structure a launch? What is a one-month launch plan? I didn't really understand that. I was flying by candlelight.”

Write of Passage has been a consistent, six-figure sales winner for David since his initial offering netted $100,000 in the spring of 2019.
‍
But the stress and sleepless nights that came with each launch had become exhausting.
‍
He'd hit a revenue ceiling, and everything he tried to grow his business left him spinning his wheels.
‍
He worried he was weakening his relationship with high-value email subscribers by bombarding them with ads. He struggled to create a meaningful marketing message that set the right mood and effortlessly flowed into his launches.
‍
Weighing even more heavily on him was supporting his full-time staff. They depended on him and the revenue each launch brought in.
‍
He knew he needed a more effective marketing strategy for his launches. And, he wanted a plan that would help him develop a long-term vision for his business so he could keep growing.
‍
David realized it was time to get support from a specialist, but he was reluctant.
‍
His past experience with coaches had been lacking. He’d spent a lot of time and money and seen little to no payoff. He couldn’t afford to hit another dead end. He wanted someone who could get him real results.
‍
On the advice of a friend and follow course creator, David scheduled a call with Billy Broas. David discovered Billy had powerful insight around a customer’s needs and the factors that inspire them to invest in a course.

That meeting sealed the deal. David felt he could not only trust Billy with his highly respected brand, but believed Billy’s expertise would be able to boost it.

“I really believe having one unified system with somebody you trust gives you tremendous peace of mind. Billy has been helping me space out the heavy lifting month over month, marching along a path one stepping stone at a time, so that once the launch comes, it's not so crazy and hectic. The hard work has already been done.”

Having played college golf, David understood the value of working with a great coach. He instantly appreciated being able to relax and lean on Billy’s guidance.
‍
Together, they mapped out a high-impact marketing campaign for David’s next launch using methods Billy knows are proven to work.
‍
They began by creating a 45-day content calendar. Spreading the word about Write of Passage over the span of a few weeks was much less taxing on David’s time and energy.
‍
They crafted a compelling marketing message. It was thoughtfully designed to not just build demand for the course, but solidify David’s stature as a teacher.
‍
They led up to the launch with a series of free resources, which included writing webinars and introduced the Write of Passage podcast. David used these avenues to educate his audience and share why his course is unique and makes a difference in his student’s lives.
‍
By giving his audience high-value content throughout those 45 days, David didn’t need any sales plugs or pitches. The course sold itself.
‍
In less than two months with Billy, David had a streamlined launch strategy, a more manageable workload, as well as room to focus on course creation.
‍
More importantly, Billy made it easy for David to execute the plan step by step. David never needed to wonder what direction he was headed in or what to do next.

All that was left to do was open the cart and see how fruitful their efforts had been.
‍
What they found were people lined up to sign up as soon as registration was available.
‍
David was accustomed to seeing six-figure results, but he was astonished to watch his sales far surpass every previous launch.
‍
By the time the cart closed, David had doubled his revenue to the tune of $206,000!
‍
His revenue ceiling now in his past, David can sense the potential for future launches. Working with Billy, he now has a marketing game plan he can use to score even bigger wins for his business and his students.
‍
He can further develop and deliver exceptional material for his course. He can provide healthcare for his staff. He can offer scholarships and create a Write of Passage program geared towards children.
‍
And for the first time, David finally had the results he’d been seeking with a coach. His return on investment was even greater than he could have envisioned.
‍
Excited about what lies ahead, David is confident he and Billy can expand the Write of Passage platform and its influence. His continued success means he can better help his students succeed.

“Billy thinks of it as a business so I don’t have to. I’m a creator, so the more I can outsource what it means to build a business and all the structure that goes along with that, the more I can focus on designing a five-star experience with my students.”
‍

Ready to take your next launch to new heights?

If you’re an online course creator eager to attract your ideal students, ramp up your revenue, and increase your impact, click below to fill out an application and see if you’re a good fit.
‍